The Wall – East Side Gallery 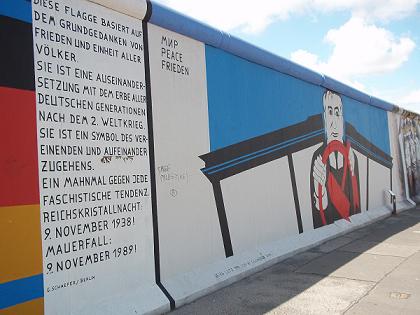 Today the wall is broken down almost completely. The most important part that remains is 1.3 km and can be seen in Mühlenstraße. This part is called the East Side Gallery. It’s near Ostbahnhof in Friedrichshain. More than 100 international artists have painted on the Wall in 1990. There are 105 paintings. Nearest metro station is ‘Warschauer Strasse’.

History of the Berlin Wall

After the Second World War Berlin was divided into four zones: United States, United Kingdom, France and the Soviet Union. The Allied zones of the West were afterwards combined into one zone: West Berlin. Many (higher educated) people living in East Berlin escaped to West Berlin in the fifty’s. The Wall was build by the German Democratic Republic in 1961. They wanted to cut off West Berlin from East Berlin and the surrounding East Germany. The building started on Saturday, 12 August 1961 at midnight. Police and army troops closed the borders by sunday morning. The Wall had a size of 140 km with towers, armed guards, fences and mines. People who tried to escape were shot or sent to prison if they were catched. After political changes in other East-European countries citizens of East Berlin were allowed to walk through the border checkpoints to West-Berlin without ID. What followed was the German reunification on 3 October 1990. 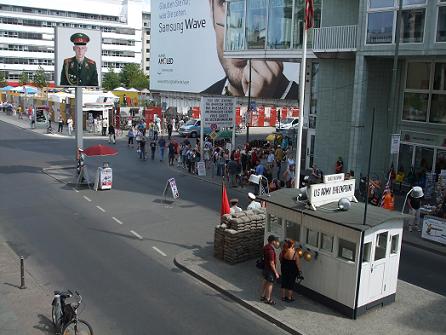 Checkpoint Charlie (2010, a small copy of the original)

There were 9 border crossings between East and West Berlin. The most famous one was in Friedrichstrasse: Checkpoint Charlie. It was the only place where foreigners could pass the border. The original Checkpoint Charlie housing has moved to the museum. The one in 2010 is a smaller copy. In November 1989 the East German Government decided that all citizens could visit West Germany and West Berlin. In 1990, West- and East Germany were united and Berlin became again the capital. 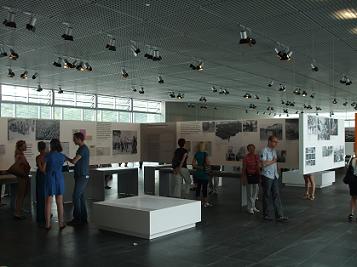 Turning from Checkpoint Charlie to the left (Zimmerstrasse) and walking 300m, visitors will come at an open space. In this space is the museum Topographie des Terrors. This is a documentation center with lots of pictures and digital information of the period 1933 – 1945. The central institutions of Nazi persecution were on this area. A part of the Berlin Wall is adjacent to the Topography of Terror site. This part of the wall is the second-longest what still exist (after the East Side Gallery).