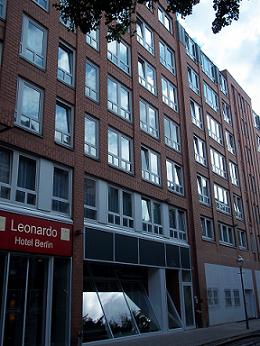 Leonardo Hotel is in the district Charlottenburg-Wilmersdorf. It’s in a normal neighborhood in a quite street. Between the metro station and the hotel is a large supermarket. An italian restaurant with terrace is opposite the hotel.

Rooms & hotel services
Our twin room was modern and clean with a view on the street. It had a flatscreen television on the wall, coffee/tea maker and a small desk. Airconditioning was working well. The minors: there was no fridge in the room. Internet is expensive: €7 for one hour and €12 for 24 hours. Internet in the lobby is free (but often not available). The breakfast room on the first floor is large, clean and the hot/cold buffet is good. Hotel staff was friendly and efficient; check-inn was fast. Check-out gave some problems. The total price in the hotel was €5 higher than the total on my reservation papers. But the staff member changed this into the price when i booked online.

To Tegel Airport
Tegel Airport has not a train/metro connection. The airport express buses (X9, 109) have a stop close to Leonardo Hotel. Travel time from the hotel to the airport is 10 minutes. Fare about €2.

Our review
On the internet, Leonardo Hotel has good customers reviews. We also liked the hotel. Room and breakfast were good and to the metro was just 2 minutes walking. However if we come back again to Berlin we will choose another hotel with a more central location. Charlottenburg-Wilmersdorf is not in the centre of the city. We liked the area of Museum Island and Friedrichstrasse Station with it’s small restaurants, cafe’s and terraces. A few popular hotels (each with thousands of reviews) are in Alexanderplatz which is near Museum Island.